This magnificent home was built in 1838 for Colonel Samuel Rockwell in Milledgeville, Georgia. The ideal location for a house during the antebellum period was thought to be in the middle of a grove of trees at an appropriate distance from the road on the crest of a hill. The home was built by architect Joseph Lane Sr., whom Rockwell brought with him from Maine. Lane also designed buildings at nearby Oglethorpe University. 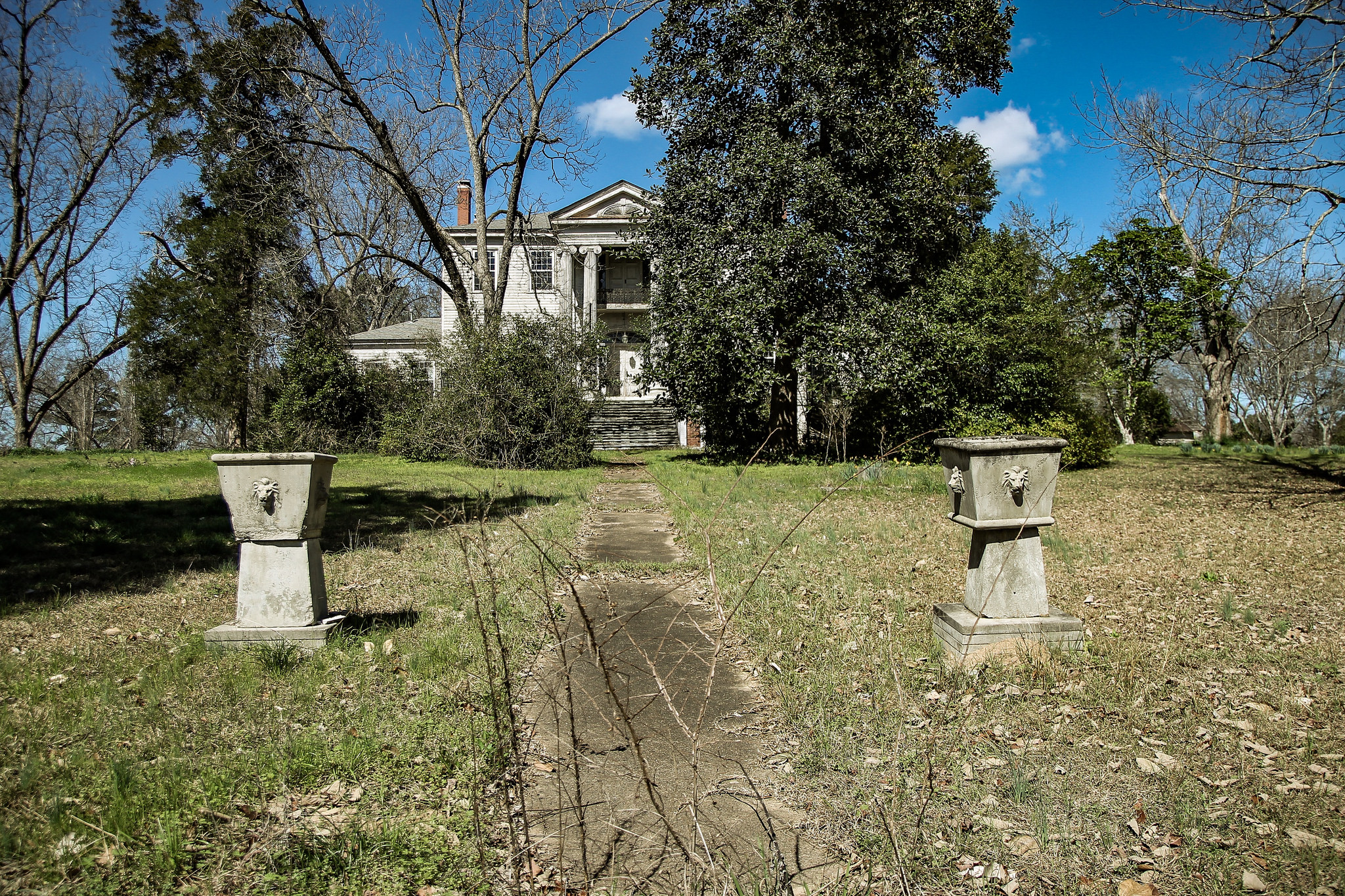 The Rockwell House consists of eight rooms along with a front and rear foyer on both levels. The front porch greets visitors with steep steps and towering columns. The risers of the steps had to be replaced off and on by the owners of the house one by one until the last original one was replaced in 1971. The amount of labor that went into constructing this home is astounding. Each piece of lumber was hand cut. An unusual feature of the house is the spiral staircase. It is believed to be a copy of the chaperone stairways standard in homes of this period. As a rule, these stairways were not as elegant as this one though. The Rockwell House was constructed using a notch and peg system. The only use of nails was in the weatherboarding on the exterior and in the slats used to the hold plaster inside. The same notch and peg system were used to build the slave quarters and carriage house at the rear of the house.

Samuel Rockwell was the 7th generation of the Rockwell family in America. He was born in 1788 in Albany, New York. Rockwell moved from Maine to Georgia in 1834. He was a slaveholder and a member of the Georgia Militia. Before his law practice in Milledgeville, Rockwell served as an attorney in Savannah. He served as Inspector of the 3rd Division and Adjutant General under General Sanford during the Creek Indian War in 1836. He was also on the building committee for the first buildings at the State Lunatic Asylum in Milledgeville, later renamed Central State Hospital.

Col. Rockwell and his family occupied the Rockwell House for only a short period due to his untimely death in 1841. Records indicate Oliver Hillhouse Prince purchased the home after Rockwell’s death. Mr. Prince and his wife lived in the house for two years. While returning from a trip to New England, the couple was lost at sea during a hurricane off the coast of North Carolina. Later, Hershel V. Johnson purchased the property. In 1853, Johnson became Governor and used the residence as his summer home. It was not unusual back in those days for citizens to own homes in Milledgeville and also have another summer home nearby. 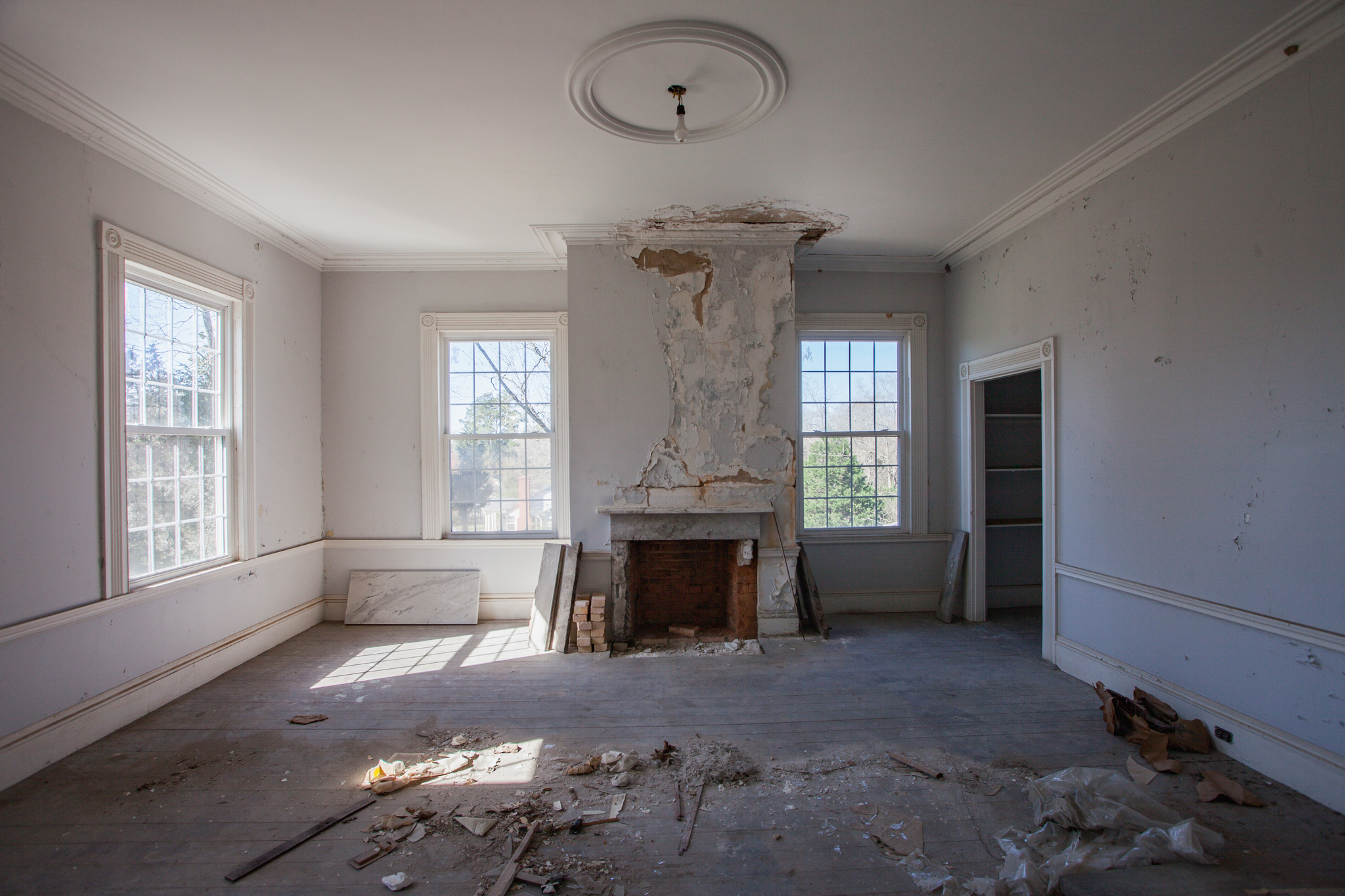 In the following years, numerous merchants and farmers owned the Rockwell House. Mr. Marshall Bland purchased the house in 1904 and lived there until 1915. The Blands moved out for a year in 1910 when Mr. Bland believed he sold the house. A man from out of state wanted to buy the house and paid Mr. Bland a deposit. The man never returned to take possession of the house, so the family moved back into the house in 1911. Mr. Bland sold the house to his cousin, Oscar Ennis, who occupied the home with his family until 1962. Dr. Robert Watson purchased the home in 1967. Dr. Watson began work to restore the home until tragedy struck. In August 1969, while removing paint with a blow torch, workers set fire to an upstairs portion of the house.

In 1969, through efforts of numerous groups, the dining room of the Rockwell House was selected for the Winterthur Museum near Wilmington, Delaware. The museum was able to purchase the room after the fire. The money from the sale went towards repairs on the house. What the museum purchased was the black marble mantle, the woodwork, and impressions of the plaster around the ceiling medallion. The woodwork included two sliding panel doors that were between the living and dining room and all of the door facings along with the wainscoting. However, the owner would not sell the pine floor. The room was reassembled to create a ‘historically accurate’ room known as the Georgia Room in their museum.

There are many stories and rumors about the Rockwell House, including a tale of gold buried in the vicinity of the house. The house stands today thanks to the efforts of Mr. and Mrs. Ogden. A local man planned to buy the home and sell the valuable doors and mantles out of it. Mr. Ogden was able to buy the house. A renovation has been underway since 1971 to restore the Rockwell House. However, very little has changed over the last several decades. The base of the columns on the front porch was originally wood, and now they are concrete. The front porch buttresses were initially wooden before being replaced with brick. 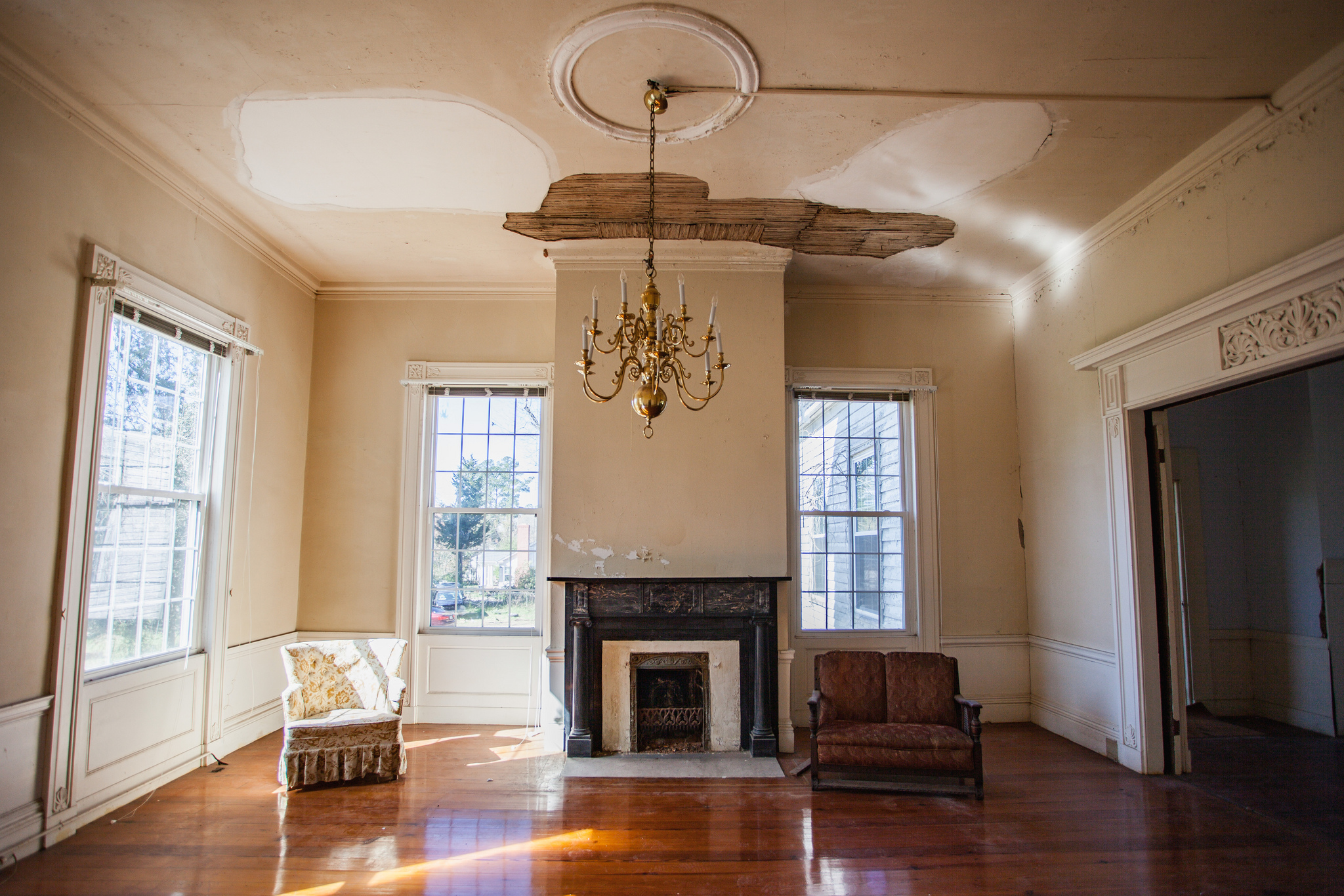 The Rockwell House was purchased in 2019 by three investors, led by Ross Sheppard, a realtor in Atlanta who specializes in historic preservation. Sheppard credits his consultant, Kyle Campbell with Preservation South in Greenville, South Carolina, for managing the tax credit application process and providing general preservation consulting. You can follow the restoration progress of the Rockwell House on the Rockwell House blog and on Facebook. 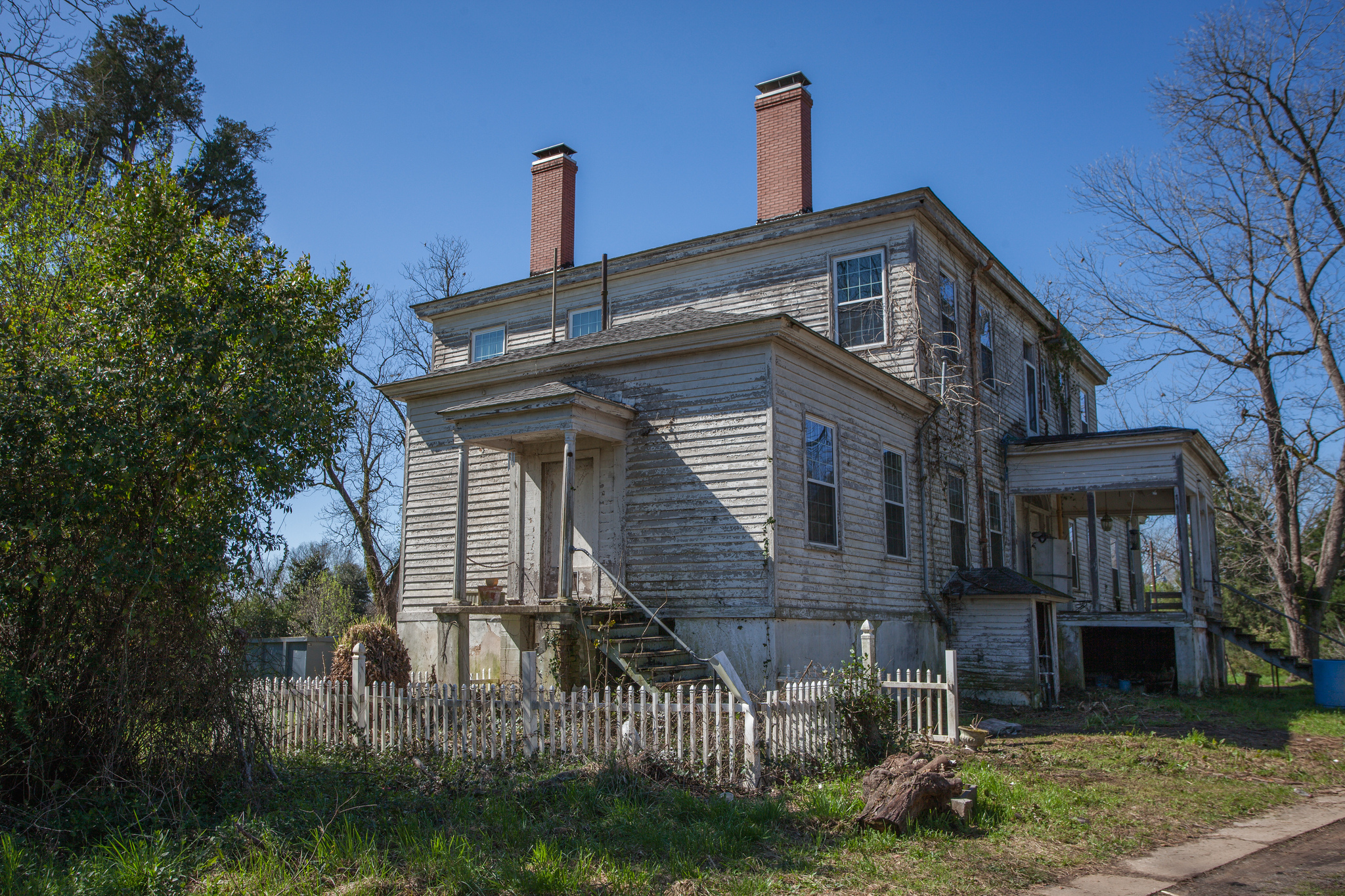 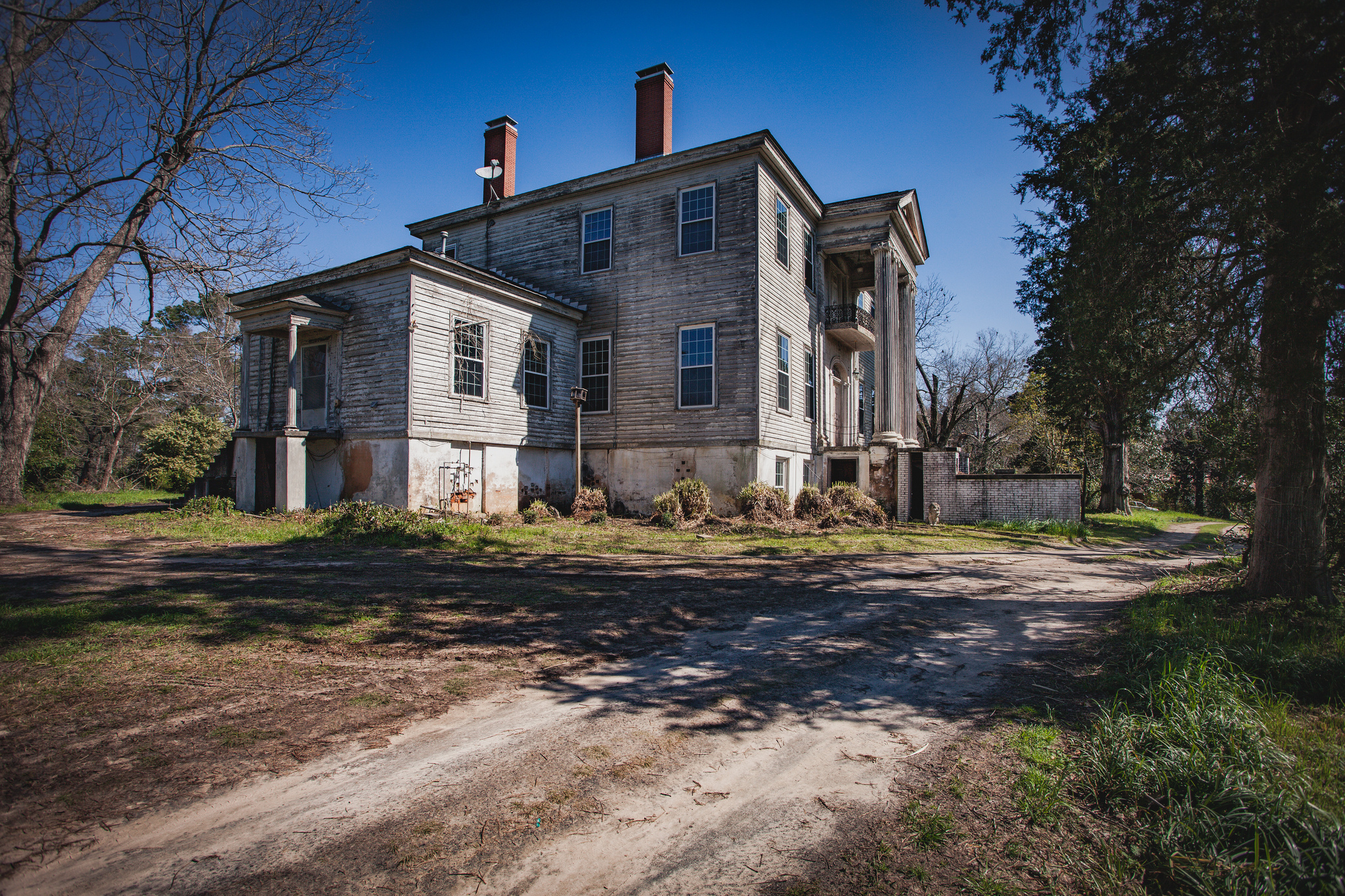 In February 2021, I was invited back to the Rockwell House to photograph the restoration. I was thrilled to be back and see the huge amount of work Ross and his team have accomplished over the last two years. 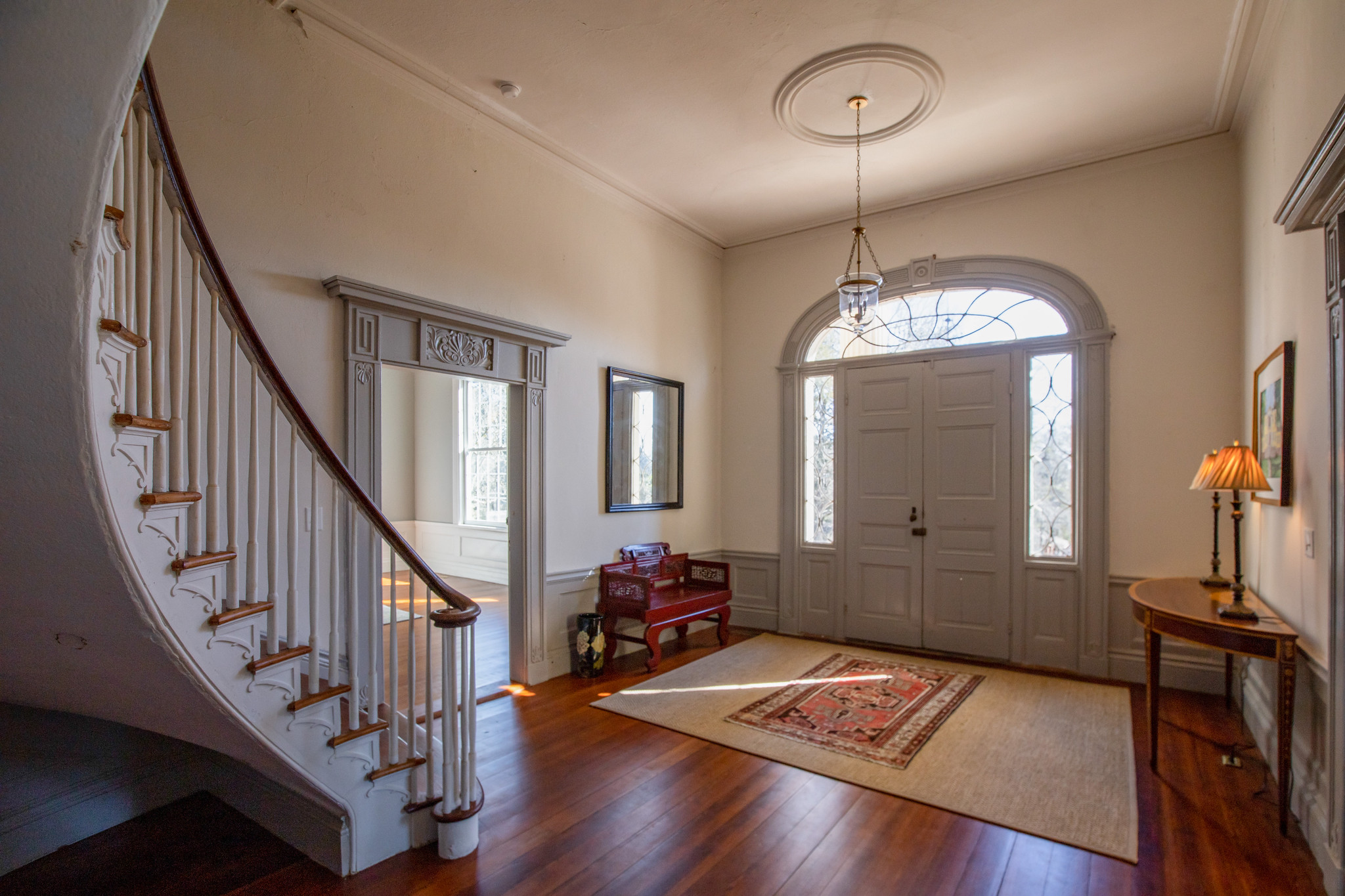 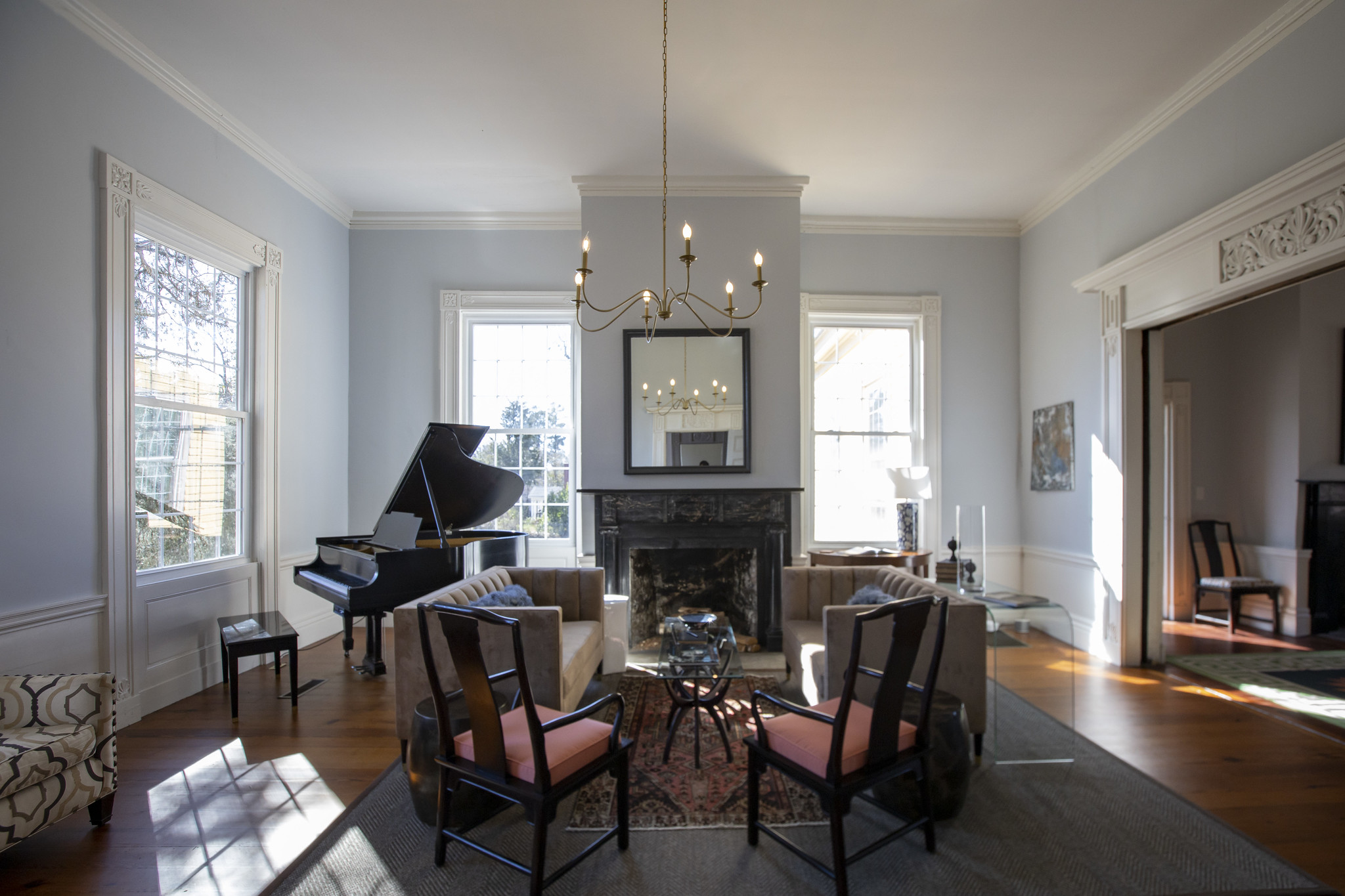 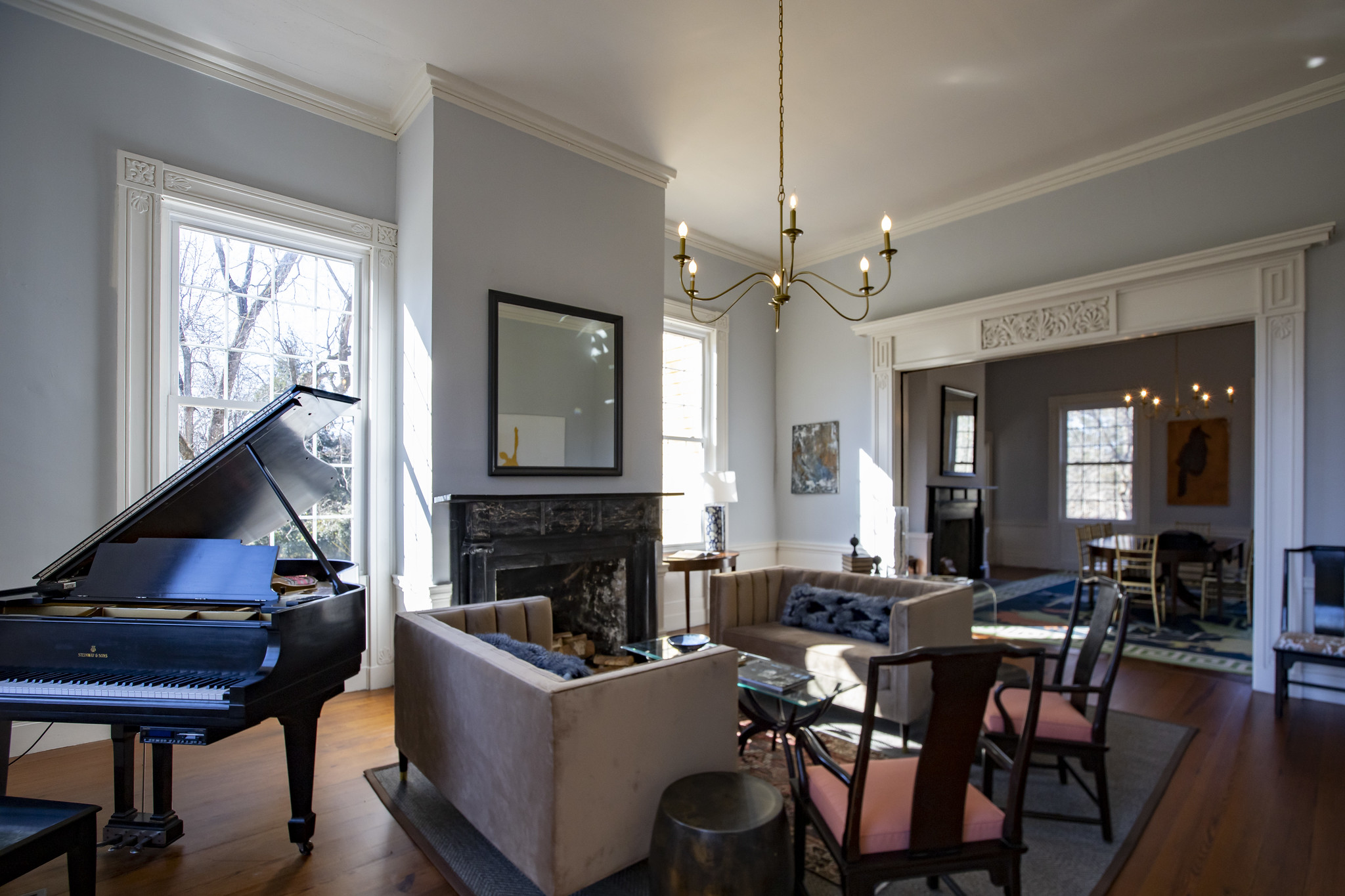 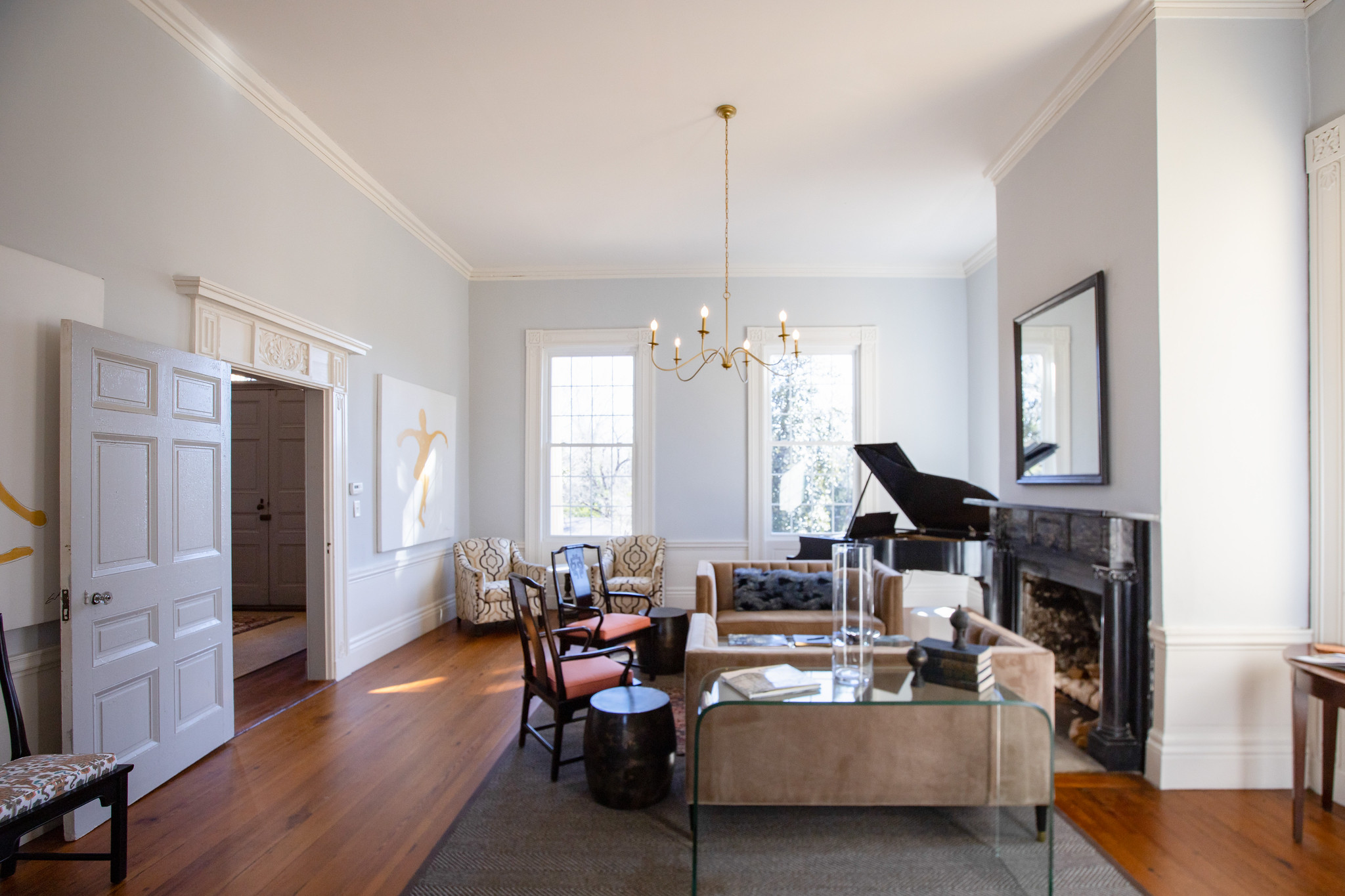 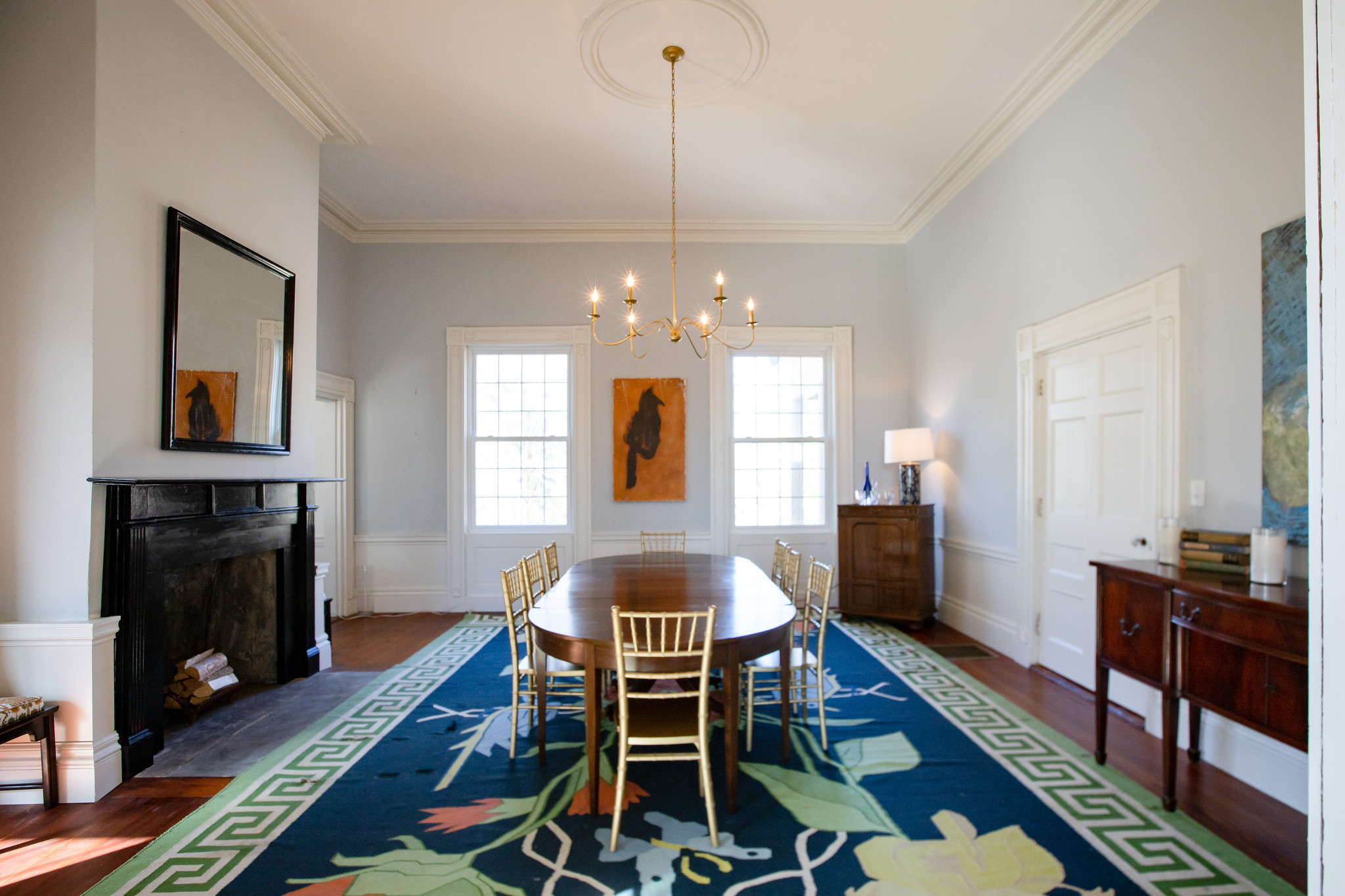 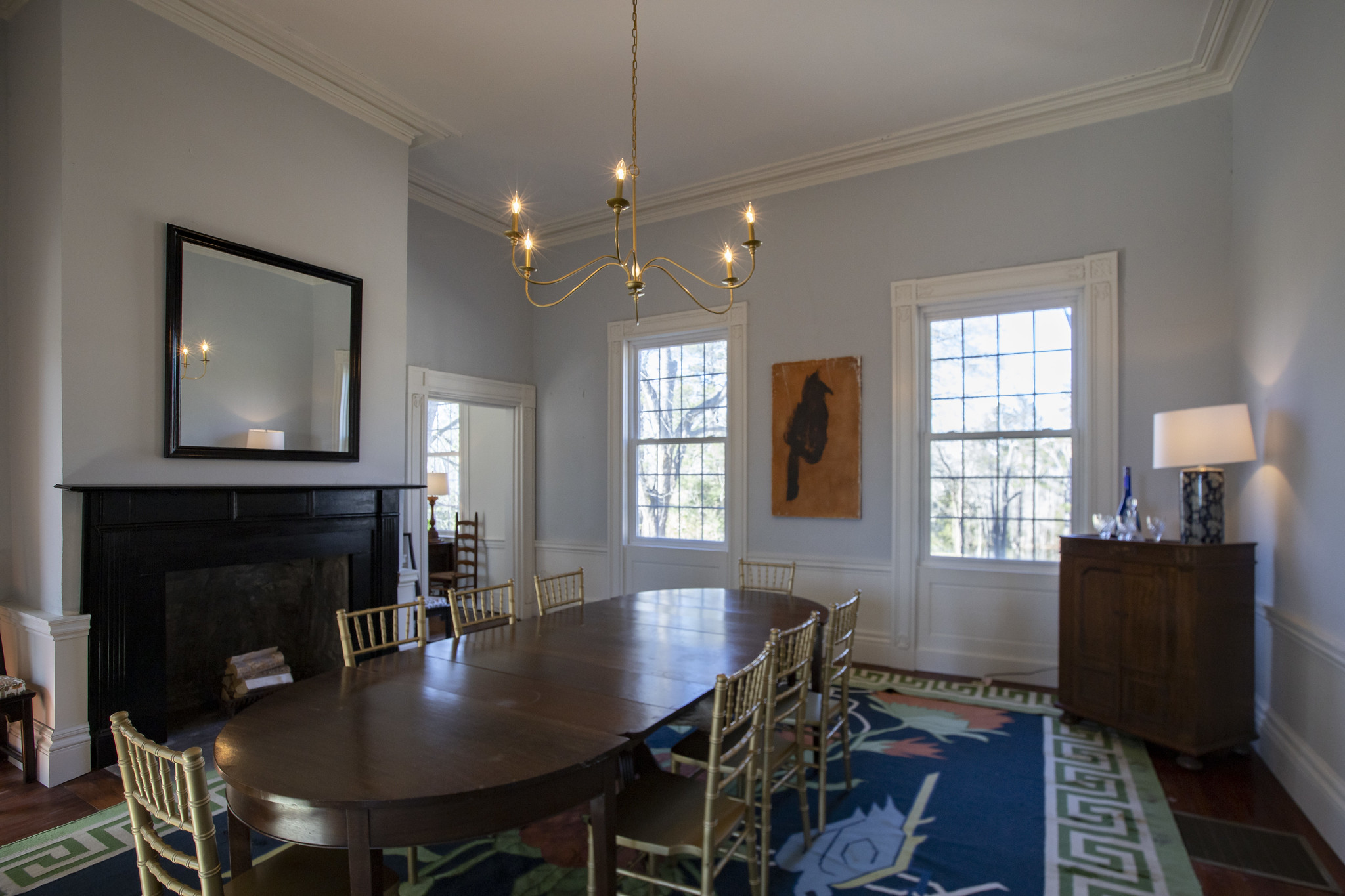 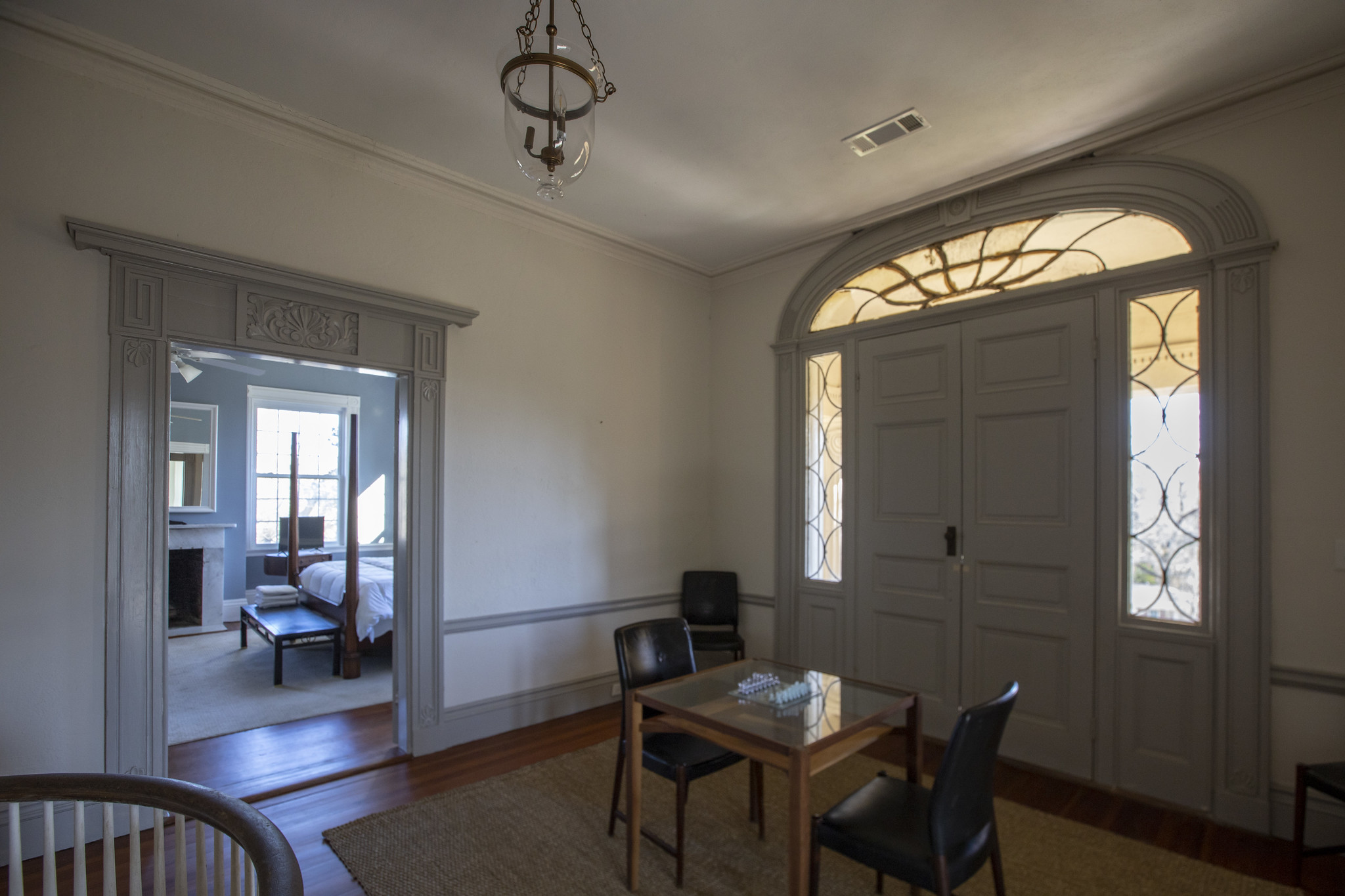 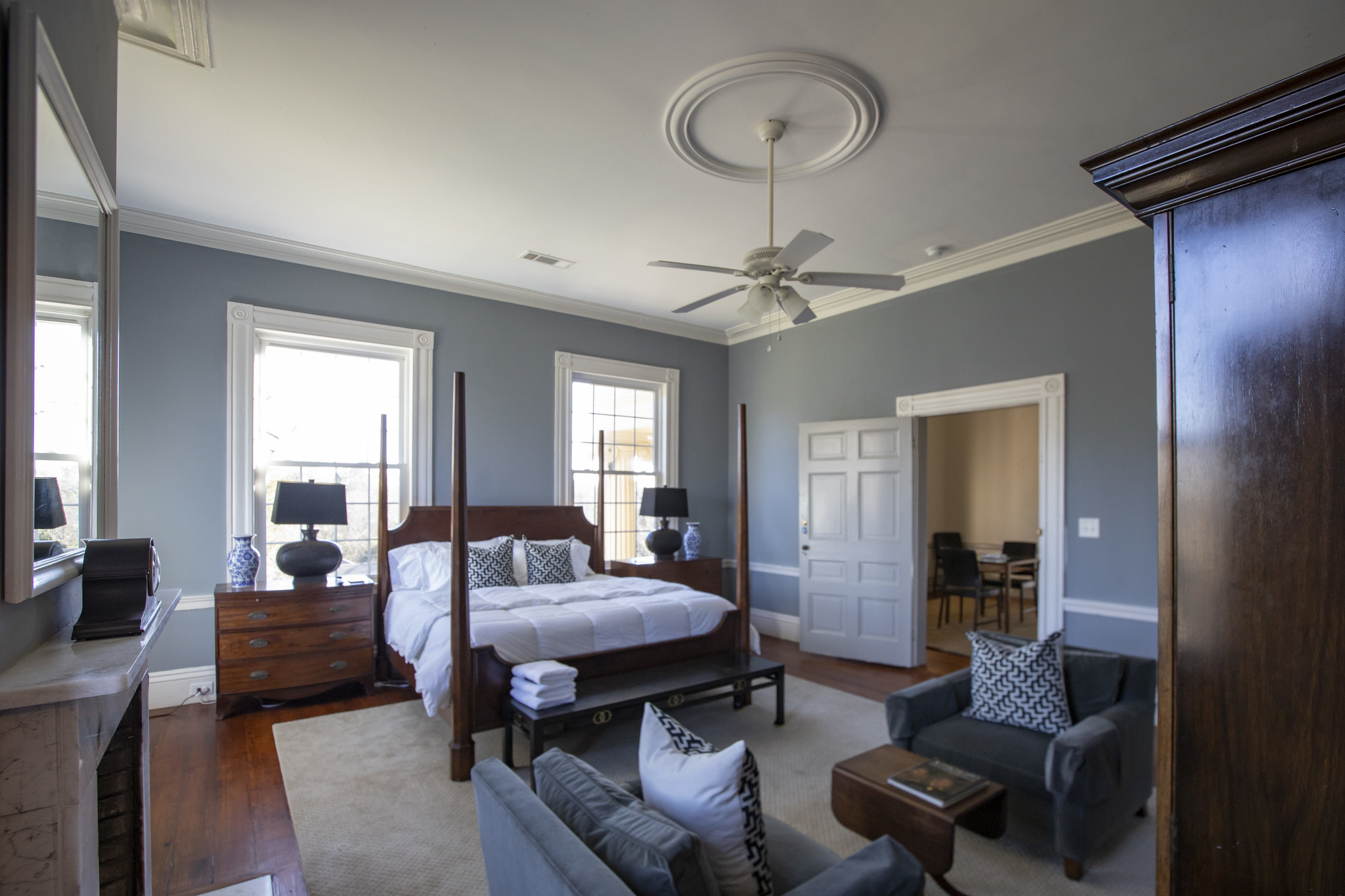 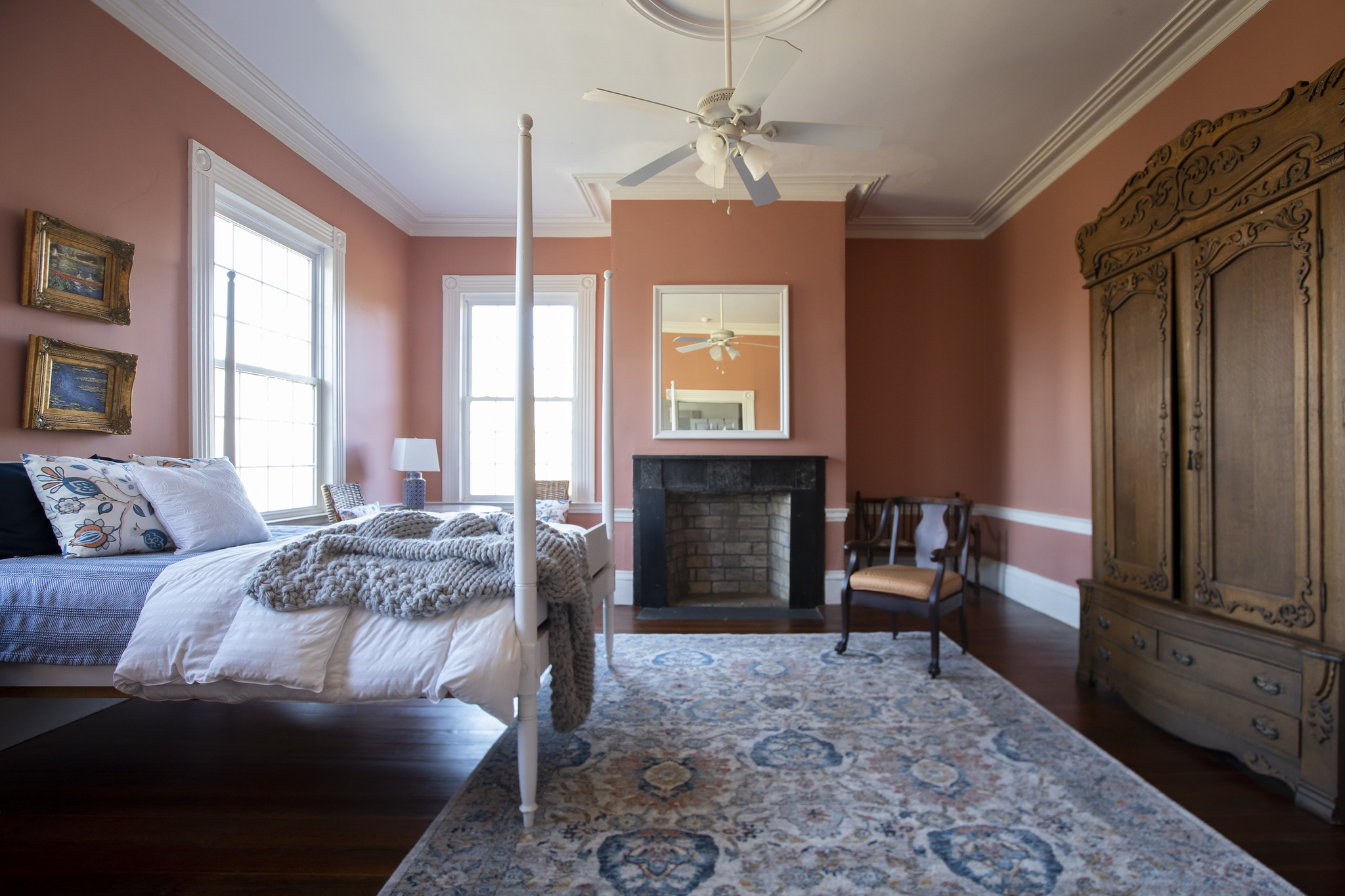 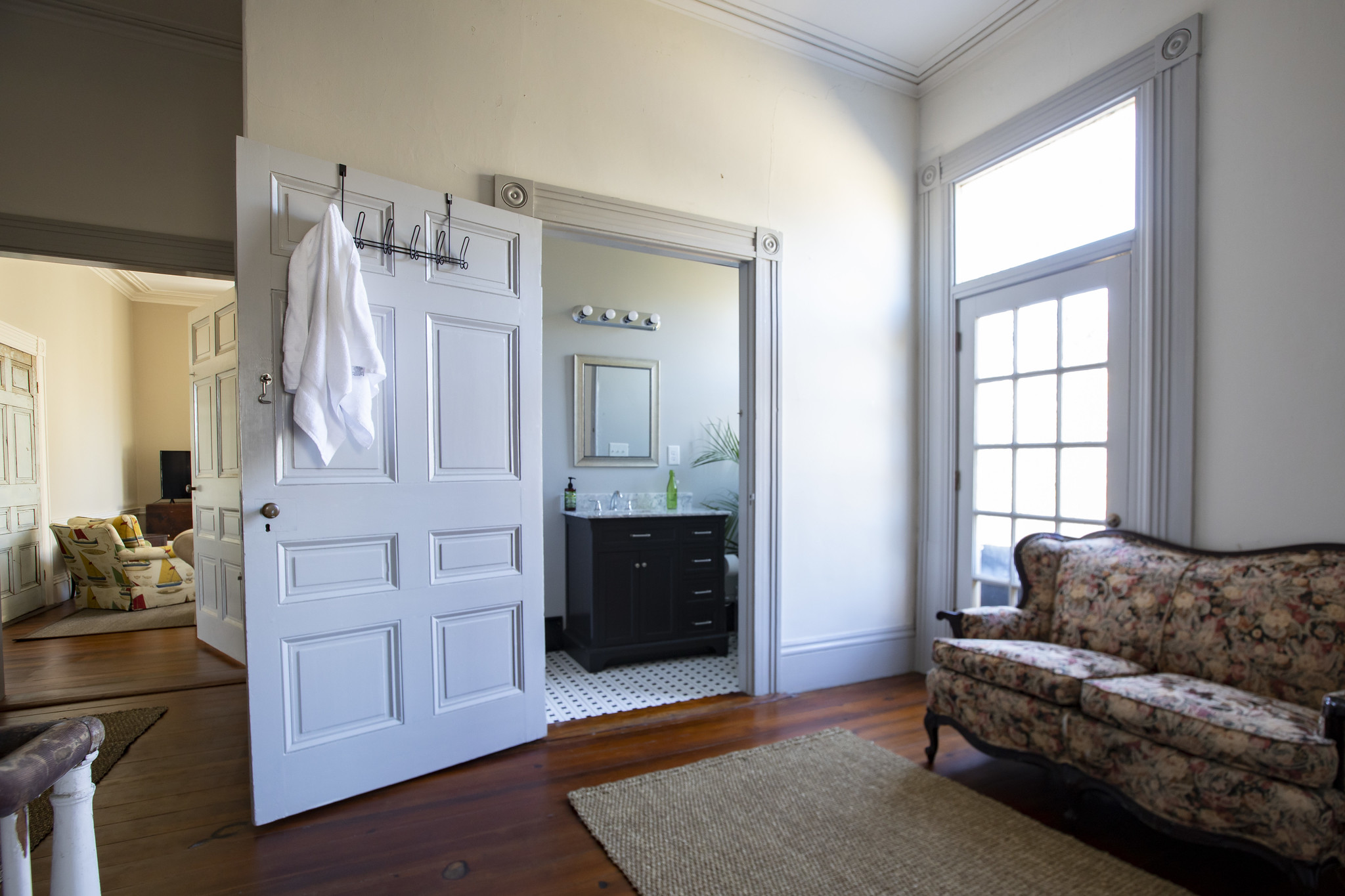