In 1873, the General Assembly of the State of Tennessee realized the need for a hospital for the mentally ill. The plan remained dormant although several sites were considered. Twelve years later, in 1885, the idea to build a hospital was revised. A former plantation owned by General Calvin Jones was selected and purchased by the State of Tennessee. The 1,140-acre site would provide a quiet, relaxed setting in a country atmosphere.

Designed by the McDonald Brothers Architectural Firm, the facility was modeled after the Kirkbride plan, an architectural design meant to have a curative effect on patients. The Kirkbride plan consisted of open spaces and natural light. The asylum officially opened on November 22, 1889. Once it opened, 156 patients were transferred from an overcrowded Nashville asylum.

In 1923, the mental asylum began operating under the Department of Institutions and remained under their guidance for the next thirty years. The institution’s patient population grew from several hundred in the late 1890s to over 2,300 by the 1960s.

The large overcrowded dormitories offered little privacy. With so few doctors and staff, patients became ‘warehoused’ for decades. Due to severe staff limitations, patients were fortunate to see a psychiatrist for ten minutes a week. Treatments performed here included hydrotherapy, insulin shock therapy, lobotomies, and electric shock therapy, to name a few. The system for securing financing for patient care limited the operating budget. State agencies agreed to only pay for one patient per one thousand. Hospital superintendents had to engage in deficit spending to keep the hospital operating. 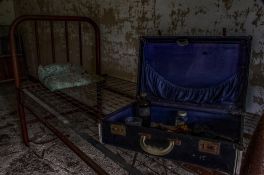 The institution once had a connection with Georgia Tann, who operated the Tennessee Children’s Home Society, an adoption agency in Memphis, Tennessee. Tann used the unlicensed orphanage as a front for her black market baby adoption scheme. Children born to patients at the asylum would be placed for adoption with a false background for as little as $7. Many children were sold to pedophiles or for slave labor. Over the course of thirty years, as many as 5,000 families were displaced due to Tann’s adoption practices.

Backed by local judges and politicians, Georgia Tann made millions from the 1920s to 1949. Children at her orphanage were starved, beaten, and molested. During four months in 1945, fifty children died while in her care, prompting an investigation by authorities. Not until her death in 1950, due to cancer, did the real story of her infamous career come to light.

The advent of modern psychotropic medications and outlawing unpaid patient labor helped dwindle the overcrowding. Newly developed antidepressants were used to treat depression and a few other disorders. New psychiatric drugs made it more feasible to release people into the community. Many of the early records of admission and death certificates are long gone. Patients that died at the asylum were buried in unmarked graves behind the facility. Today, the mental facility maintains care of about 250 patients and has 700 employees.