Dr. David Elias Morgan was born on August 1, 1864, in Monmouthshire, Wales. As a young man, Morgan traveled to America in search of a better life. Once in the United States, he first moved to central Florida. During an outbreak of yellow fever in the 1880s, Morgan decided to get on a train bound for New York. He stopped in Columbus, Georgia, where he met his future bride, Minnie Alice McGehee. Dr. Morgan decided to stay in Columbus and the couple later married on April 29, 1890.

In 1904, Dr. Morgan purchased the materials of a partially burned house on the west side of Lower Broad Street in Columbus. He moved the timber, windows, entrances, doors, and hardware to a hill in Girard, Alabama. Using the materials of this 1840s house, Dr. Morgan constructed the existing structure known today as the Morgan-Curtis House. Originally, the hill on which the house is built had a log cabin surrounded by large hardwoods, pines, and ornamental scrubs. It is believed that Wilson’s Raiders camped on the hill when they prepared for the Last Land Battle of the Civil War fought in Girard.

Dr. Morgan had a medical practice in Columbus first, but in 1914 he decided to convert the second floor of his residence into a sanatorium for the treatment of out-of-town patients. He saw just four patients at a time upstairs. As a doctor, he treated all sorts of ailments from the common cold to delivering babies. In fact, a family member believes that Dr. Morgan delivered more babies than anything else. He would also take anything as payment for services rendered. On one occasion a patient paid him in chickens. Another paid him in paintings, several of which still hang on the wall upstairs.

Dr. Morgan and his wife had four children together – John Pierpont, William Earl, Ruth Morgan, and Minnie Alice. Earl was a lawyer and John was a doctor. Sadly, neither of the sons survived into old age. In 1934, John P. was killed at the age of 32 when he was run over by a train. William Earl died from ingesting some bad alcohol. Ruth became a pharmacist and Minnie became a chiropractor. The following year, on January 15, 1935, Dr. David Elias Morgan passed away at the age of 70. The doctor and his family along with various members of the Morgan and Curtis families are buried in the Morgan Cemetery on the property. There are roughly two dozen graves in the cemetery.

After Dr. Morgan’s death, his daughter Ruth Morgan Curtis received ownership of the home. Ruth and her husband Virgil C. Curtis Sr. also took over Morgan Drugs on 14th Street in Columbus. The Morgan-Curtis House was later passed down to their son, Judge V. Cecil Curtis Jr., and his wife Faye S. Curtis. In 1983, the property was added to the National Register of Historic Places. The upstairs was converted into two apartments and remained occupied until about five years ago. In 2000, the Morgan-Curtis House was sold to Dr. Morgan’s great-grandson, Steve Abbott. Today, the Morgan-Curtis House and 11 acres remain in the family and are cared for by Dr. Morgan’s great-great-grandson and his siblings. For most of its existence, the house was always maintained. Once vacant, Steve Abbott decided to take on the task of restoring the property.

Depending on who you ask, Dr. Morgan may still keep an eye on his house. Stories dating back more than forty years from various family, friends, and neighbors detail accounts of a woman in white or a man dressed in black seen on the grounds. Once a neighbor saw a woman in what resembled a white nurse’s outfit or an old gown standing in the driveway. In 1999, a house painter photographed the same woman standing on the second-floor balcony. When Steve Abbott began renovating the old family home, he hired several painters to work downstairs. One day he came by to check on them, and they asked him about someone walking around upstairs and thought it was him. When Steve told them that he just got there, they refused to enter the house and quit. A second painter was hired and working upstairs when he saw a man in a black outfit walk down the hallway. He turned to speak to whoever he saw, and the man vanished. After this occurrence, the second painter also quit. The family is continuing to work to restore the property.

THESE PHOTOS WERE TAKEN WITH PERMISSION. PLEASE DO NOT TRESPASS. THIS IS PRIVATE PROPERTY. THERE ARE CAMERAS IN USE ON THE PROPERTY. NEIGHBORS WATCH THE HOUSE. 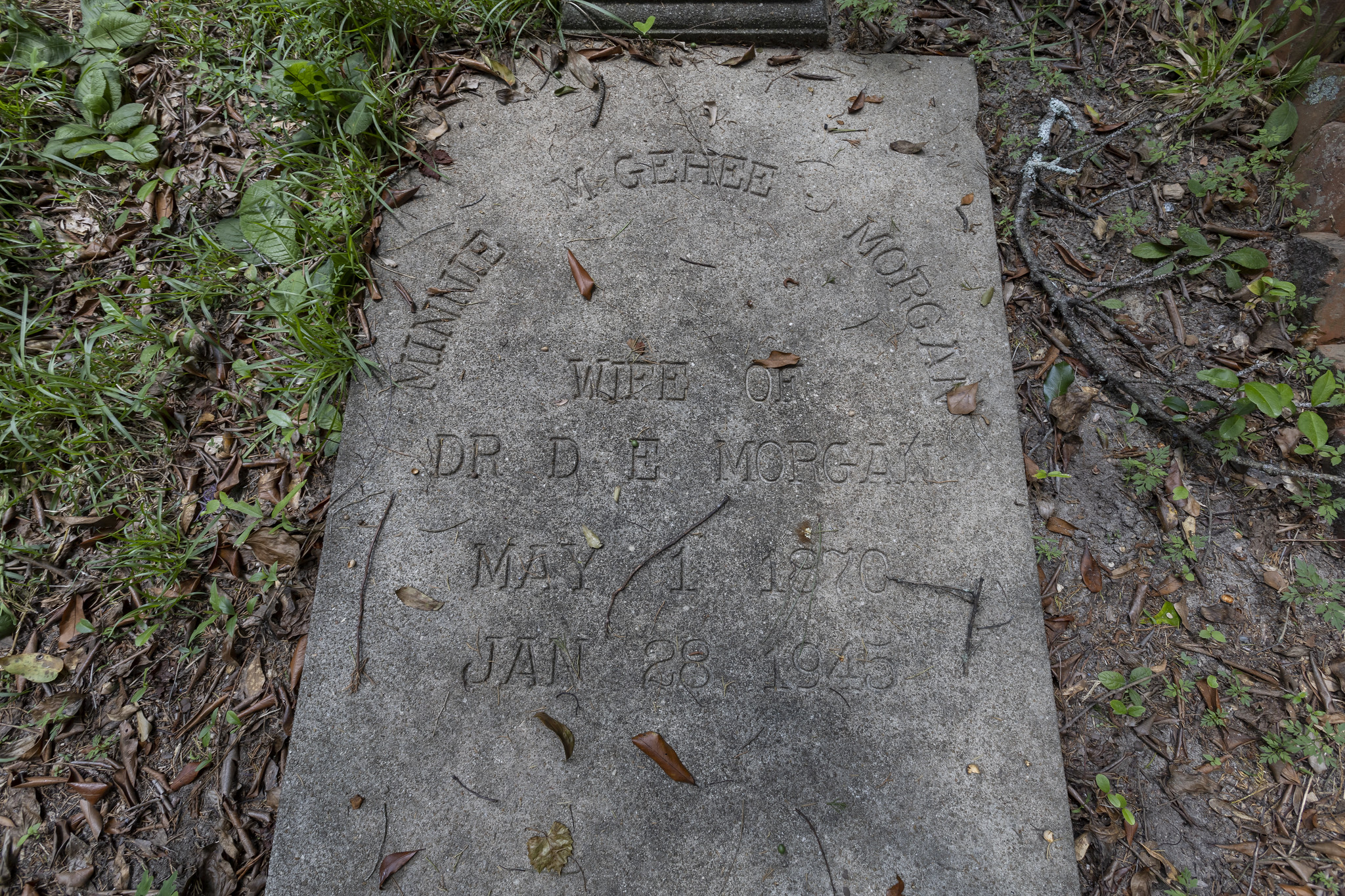 You can find me on Facebook, Instagram, Twitter, and TikTok. For more amazing abandoned places from across Alabama, check out my books Abandoned Birmingham and Abandoned Alabama: Exploring the Heart of Dixie.