The Slossfield Community Center campus consisted of a health clinic, maternity ward, a recreational center, and an education building. The complex was built between 1936 and 1939 by ACIPCO (American Cast Iron Pipe Company) along with public funding as an extension of their health program for workers and their families. The Art Deco styled, solid concrete buildings were designed by E. B. Van Keuren and constructed by the Works Progress Administration.

The 20-acre site was the former home of the Birmingham Police horse stables but was donated in exchange for the cost of relocating the stables. In the 1930s, Slossfield was a neighborhood surrounding ACIPCO’s plant where thousands of African-Americans lived in shotgun houses without plumbing on dirt streets. Even during the Great Depression, this area was considered one of Birmingham’s most blighted, where 10 babies died out of every 100 born.

The health clinic opened on July 1, 1939. In an early form of universal health care, patients had to demonstrate an inability to afford private health care. The clinic provided obstetrics and prenatal care by house call or in office visits. The facility also provided tuberculosis treatment, dental care, general pediatrics, and venereal disease detection by Jefferson County staff. The health clinic served as a training center for graduate students and provided health education to the public. The Slossfield Community Center served 50,000 Black citizens in one of the poorest neighborhoods in the Southeast. 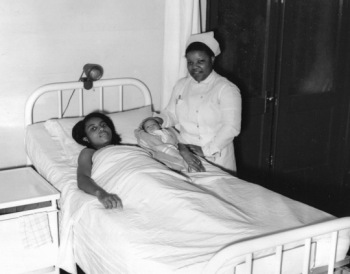 A mother and her baby pose with a nurse in the 1940s. Photo by UAB Archives 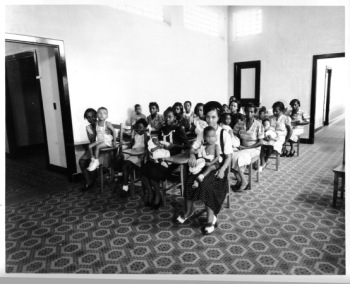 Patients wait for the doctor at the Slossfield health clinic. Photo by UAB Archives

Dr. Thomas Boulware, later nicknamed ‘The Old Stork’, was recruited to Birmingham by Charles Carraway. He is responsible for many obstetrical firsts in Alabama including the first pregnancy test administered, the first OB/GYN residency approved in Alabama and the first Cesarean section. Dr. Boulware joined a public health movement in 1939, crossing racial barriers to assist in relieving Slossfield’s misery. The neighborhood lacked significant maternity care. For almost a decade, Dr. Boulware worked at Slossfield’s 12-bed clinic dedicated to providing better prenatal care for mothers and their babies. Within the first three years, the stillbirth rate and neonatal deaths at Slossfield were cut in half. Boulware also trained black physicians such as Dr. Robert Stewart, who became Alabama’s first Black OB/GYN practitioner. Dr. Boulware retired in 1977 after birthing 21,000 babies over a 48-year career.

The rest of the community center campus closed in 1954. The recreational center and education building were sporadically used until the late 1970s, mainly as storage for the Birmingham City school system.

The concrete buildings have suffered heavy water damage from lack of maintenance over the years. Today they sit in an advanced state of decay. Vandals have smashed windows and started fires throughout the buildings.